Why aren't Wyoming's leaders demanding more bang for the bucks that they are spending on their schools?

“Much of the confusion and complication of ideological battles might be washed away if we held our focus on the lives that would be made better or worse … rather than on the theoretical elegance of the policies ...” – South Bend, Ind., Mayor and Democratic Presidential Candidate Pete Buttigieg in “Shortest Way Home,” 2019, page 88.

Nothing made me more unhappy in the wake of my recent post about Wyoming education than to see our conservative readers rallying around it. (Truth to Power: “Ignore Balow’s cheerleading. The numbers show Wyoming schools have a lot of work left to do”(https://cutt.ly/setfa6g)”
True, my main point was dead on: Wyoming leads the nation in education spending, which in turn over-inflates its success in reports like Quality Counts 2019. My second point: There is nothing to indicate that Wyoming’s academic performance, despite that spending, is anything better than mediocre.
Conservatives 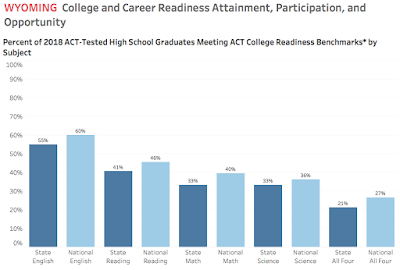 immediately latched onto the money angle: The post was “proof” that there is no relationship between the amount of money spent on education and on results. The implication: Get out the budget knives and start carving up the state’s schools spending.

But my post was not intended to imply – in any way – that cuts in Wyoming education funding are needed.
Yes, the state’s Republican leaders are focused on cuts as the biennial budget session nears due to declining revenues. And they no doubt will use arguments such as my post to justify cuts in education spending. They always would prefer to focus on cuts to balance the budget instead of asking this state’s residents to come up with more in sales or property or, god forbid, income taxes to fund a truly great education system.
Lawmakers can’t cut their way to education success, but they are afraid to face the other reality: They are not demanding enough from the state’s multitudinous school districts, and they not holding them accountable over their continued failure to perform.
The real problem is not that Wyoming is paying too much to fund its schools. That amount is a requirement of the state Constitution, and any effort to the starve the schools to success surely will meet with defeat in the Wyoming Supreme Court. That body already has said the schools must be adequately funded, and funding levels are part of the justices’ mandate.
No, the problem is that the Legislature refuses to hold local school districts’ feet to the fire. Poor student performance? Schools that aren’t producing college-ready graduates? The fact that some districts excel while others languish, meaning some kids are consigned to inadequate educations? Not the Legislature’s problem. Let the state superintendent – or someone else, anyone else – worry about that.
This is the point of the quote from Buttigieg above. These are words spoken from the mouth of a successful mayor who turned a languishing town – South Bend, Ind. – into a growing and going concern. He did that by jettisoning long-held beliefs and challenging political gospel, the “theoretical elegance of the policies,” and focusing on what does, and does not, work.
So it is with Wyoming education and politics. This state’s conservative leaders are firm believers in the Gospel of Local Control. They firmly believe that locally run school districts are the proper way to handle education in Wyoming, the old saw about “government closest to the people being the best.” Thus, they refuse to demand excellence from the state level for fear of violating that Gospel. The result, unfortunately, is an under-performing school system.
The above graphic shows just how far Wyoming schools are from being excellent. In not a single category does the Cowboy State out-do the national average. That is the national average, dear readers. And anyone who thinks the U.S. is a national leader in education excellence is lying to him or herself. This nation’s schools are mediocre, and Wyoming can’t hit the national average? This state is not even mediocre in a mediocre system? The Cowboy State can – and must – do better.
That, my conservative friends, was the point of my recent post. It was not that Wyoming is spending too much on its schools. Rather, this state’s politicians and parents are not demanding enough from their educators and superintendents and school boards. Indeed, Wyoming’s leaders would rather have their state superintendent, Jillian Balow, brag about how great this state’s schools are than to do the hard work to fix them. That keeps the masses ignorant and the politicians safe.
Am I saying that I would prefer to see a centrally run education system with rewards and punishments meted out from Cheyenne? Well, yes. If local schools have to meet – or at least grow toward – excellence, maybe the bull manure about Wyoming having great schools might begin to approach reality.
But that is not about to happen in this conservative crazy state. Yet couldn’t the State Department of Education and the Legislature at least begin a process that rewards success and punishes those who languish? How does maintaining the status quo ever move this state’s schools – and more importantly its students – toward excellence?
How about starting with more truth-telling and less cheerleading from the state superintendent’s office and members of the Legislature’s education committees? How about admitting that there is a lot of work still to be done? Maybe then parents and taxpayers could focus on the hard work of improving the schools rather than lying to themselves that they have great schools. And maybe strategies could be developed so that Wyoming truly is getting the bang for its education buck.
Conservatives would be wise to stop looking to cut education funding and rather begin demanding that every dollar spent on education bring a dollar’s worth – or more – of quality schooling. It’s easy to cut; it’s harder to toss aside the “theoretical elegance of the policies” and do what it takes to re-make Wyoming’s mediocre schools.
If that means more stick and less carrot from Cheyenne, let’s get it done. The states, the nation, indeed the international community, that are doing this right aren’t waiting for Wyoming to catch up. Indeed, every day of delay leaves the Cowboy State's kids every further behind.

D. Reed Eckhardt is the former executive editor of the Wyoming Tribune Eagle.
Posted by Publius Wyoming at 6:36 PM