Apollo 11: A triumph of the human mind 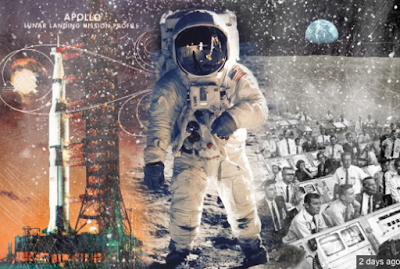 BY BRADLEY HARRINGTON
Very well do I remember those words as Commander Neil Armstrong uttered them, for – with thanks to the miracles of a beat-up black-and-white Magnavox TV – my Dad and I heard them with our very own ears, exactly 50 years ago on this very day.
Yep, that old Magnavox was all we needed to see the whole show. Which, since we had just moved to Detroit from Pasadena, Calif., a few weeks earlier, we watched sitting on orange crates. Not that we noticed.
I’d been following Project Apollo almost since I was old enough to read – or, at least, since I’d read Robert Heinlein’s “Have Space Suit – Will Travel” a couple of years earlier. Heinlein’s books, along with a host of other classics such as A.E. van Vogt’s “The Universe Maker” and Isaac Asimov’s “Pebble in the Sky,” have permanently warped my mind with a love of all things spatial and mathematical ever since, and I gobbled up Apollo the way most kids ate their breakfast cereal.
Nor was my generation alone in that regard – for it was the generations previous, the kids who had grown up on that kind of a reading diet as it was being published back in the 1940s and 1950s, who were responsible for this whole show to begin with.
Those slipstick-headed kids, you see, whose parents were busy telling them they were “escaping from reality” by reading such trash as man-on-the-moon stories, decided that those kinds of stories should be more than just science fiction.
So they went to college and they learned math and physics and astronomy and engineering – and a whole lot of them were just itching like crazy, craving like you wouldn’t believe, to get us into space. So they went out and they got jobs at places like NASA and CalTech’s Jet Propulsion Laboratory – and they started working on just those kinds of projects.
So, by the time President John F. Kennedy proposed, back in 1961, the goal of “landing a man on the moon and returning him safely to the Earth” by the end of decade, there was already an entire tier of bright, energetic, dedicated and extremely capable scientists and engineers right there, in place, to turn loose on that goal.
In this context, it doesn’t matter that the entire Apollo program was government-funded. (Should government be funding such projects? Only insofar as they relate to potential military applications. It certainly isn’t government’s job to determine the directions of scientific research or to establish control, via taxpayer dollars, over independent thought.)
But those slipstick-heads, you see, didn’t care about who was signing their paychecks. They had a mission and they tackled it with everything they had. They got it done and they put those rockets into space ... And, a half-century ago today, those incredible mental efforts resulted in “The Eagle has landed.” (For those who don't know, a "slipstick" is a slide rule, a mechanical device used to make mathematical calculations prior to the introduction of the electronic calculator.)
And, back in 1969, which I remember well enough because I was too young to be taking part in any of it, there was plenty of other competition for the news spotlight. The full force of the “1960s revolution” was in full swing by then, and we had all kinds of other things going on around us.
Militant “free speechers” were taking over university campuses; our soldiers, God bless their souls, were fighting a “war” in Vietnam they should never have been tasked with; inner-city riots had been sweeping both the Los Angeles we had just left as well as the Detroit we’d just moved to, for years; and orgiastic herds of hippies were all getting ready to descend their unwashed little bodies upon the Woodstock festival.
The magnificent energy of the Apollo 11 moon rocket blew right up and through all of that social noise like it wasn’t even there as do waves of light that effortlessly sweep away the dark clouds before them. First as Apollo 11 lifted itself up into the heavens on top of a fiery arrow of crystallized logic – then as it landed two men onto the surface of another celestial body – there was no doubt in anyone’s mind who witnessed any of it: THIS was the triumph of the human mind.
Apollo 11, both physically and philosophically, was a tremendous beacon in the sky for anyone who could think: THIS is what’s possible for humanity when it chooses to USE, not abandon, its rational faculty.
So why not continue those journeys, in both regards? Not only with the further development (through the private sector) of space flight, but on a much wider level as well ... Imagine, if you will, that we might someday learn to apply the same principles of science and logic that worked so well for Apollo – only this time we do it to the way we organize ourselves socially and politically? For now that another half-century has come and gone, isn’t most of Earth still existing in the same sub-human squalor it was experiencing back when Apollo 11 flew overhead?
Don’t we need to fix that too?
Ah, but that’s just another slipstick-headed dream ...

Bradley Harrington is a computer technician and a writer who lives in Cheyenne. He also blogs at www.reignitinglibertystorch.com. Email: bradhgt1776@gmail.com.
Posted by Publius Wyoming at 9:32 AM